Canadian Women in the Workplace: 98% Equality

It’s not uncommon for immigrants and transferees to experience a bit of culture shock when they come to Canada, especially if they’re coming from a more distant land in Africa, Asia or the Middle East. Those arriving from countries like Pakistan and Saudi Arabia may be especially surprised by Canadian gender roles and the level of gender equality in the workplace.

In fact, according to a 2019 report from the World Bank, entitled Women Business and the Law, Canadian women enjoy some of the most extensive freedom and equality in the world. And while there’s still some room for improvement in areas like pay equity, the Canadian Charter of Rights and Freedoms does guarantee equal protection under the law and equal opportunities in the workplace.

According to the World Bank’s report, only six countries have greater gender equality than Canada. Those countries are Belgium, Denmark, France, Latvia, Luxembourg and Sweden, in alphabetical order. Those countries appear to have full equality under the law, while Canada and a handful of Western European countries have 97.50 percent equality. So men and women might not experience perfect equality, but certainly no one in Canada treats women like second class citizens.

The study measured a number of factors related to how national laws affect women’s rights and opportunities in the workplace. This included laws dealing with women’s pay, marriage, working mothers, and women running their own businesses. Interestingly, the United States ranked about one-third down the list, with 83 percent equality. Several Middle Eastern countries rounded out the list, with Saudi Arabia at the bottom, showing only 26 percent gender equality. 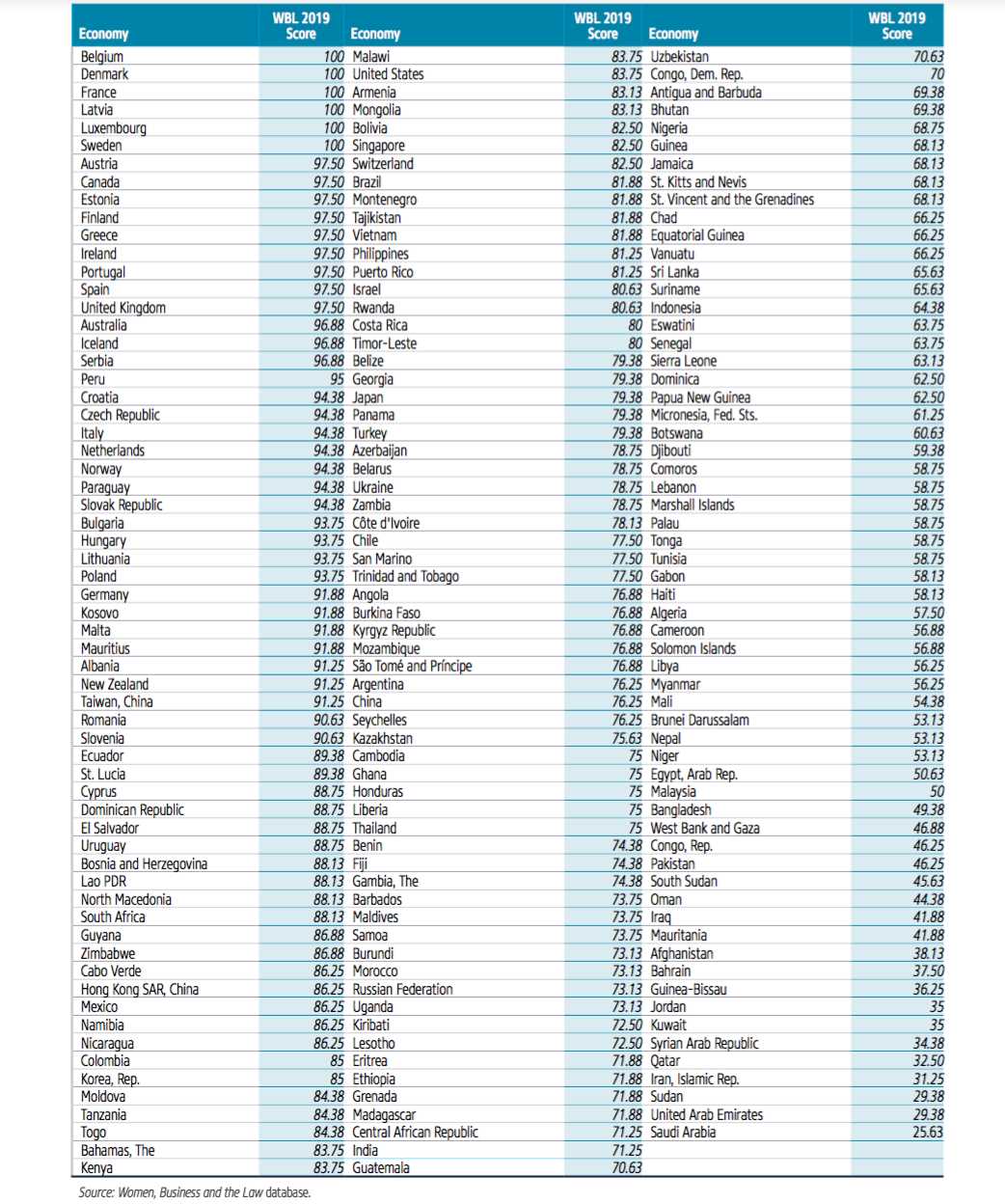 Canadian women in the workforce

So if you’re coming from a country where women are barely permitted to drive a car or walk the street without a male chaperon, Canadian culture will come as something of a shock. With equal status in society, women are highly visible in the workplace, and in most professions. As of June 2019, 61 percent of Canadian women were participating in the workforce, compared to about 70 percent of men. Women occupy important positions in both business and government.

Sexism still exists in some corners of Canadian society, and more so in certain male dominated industries. But generally speaking, there is very little tolerance for these kinds of attitudes. Canadian women expect, and typically receive, the same sort of respect given to men. A culture of political correctness has made it unacceptable to treat women or minorities as anything less than total equals. To expect female colleagues to bring you coffee, or to make any sort of sexual advances toward them, can get you into big trouble.

Recent developments in the area of women’s rights have focussed on social media, workplace harassment and rape culture. In 2018, parliament passed a bill to amend the Canadian national anthem, making it more gender-neutral, by changing “thy sons” to “of us”.

Canadians definitely value the equality of men and women, placing particular importance on treating them as equals in the workplace. Federal law and numerous provincial laws are in place to enforce this. The reality, however, is that Canadian women still receive only 87 cents for every dollar earned by Canadian men, according to Statistics Canada.

Additionally, Canadian law draws a distinction between pay equality and pay equity. Pay equality refers to the idea that men and women performing the same work should receive the same pay. Pay equity, on the other hand, has to do with the idea that female dominated professions should have a comparable pay structure to male dominated professions, if those professions are considered to be of equal importance. For example, if the work of nurses (mostly women) is considered of equal value to the work of electricians (mostly men), it’s important that nursing wages are on par with electricians’ wages. In other words, pay equality protects individual women as employees, whereas pay equity is concerned with collective women in certain professions.

The greatest sense of gender disparity is probably in the area of leadership positions. While you do see female business executives in Canada, they remain something of a statistical minority. According to Statistics Canada, 65 percent of management level positions in the country are held by men, compared to just 35 percent by women.

Furthermore, far fewer women own their own businesses. Only 18 percent of Canadian businesses are majority-owned by women, while two-thirds of them are owned by men.

Other genders in the workplace

As a supremely egalitarian society, Canada also has some of the most open and progressive policies for non-binary, transgender individuals. Since 2017, with the passage of Bill C-16, federal law has prohibited discrimination against gender identity or expression. This means that transgender people now enjoy the same legal protections as any Canadian and every other racial or sexual minority.

Some transgendered people also insist on using non-binary pronouns, such as sie, zie and xe, instead of he or she. Bill C-16 includes some strong measures against discrimination and hate speech, and according to some interpretations, failure to accept non-binary pronouns can qualify as hate speech. Immigrants and individuals with more conservative and traditionally-based values may need to some time to get used to these progressive attitudes.

To learn more about gender issues in Canada, you can check out some of these in-depth articles:

ARIANNE Relocation has been helping families, foreigners, and professionals make the move to Canada since 1996. With more than two decades of experience, we have a range of Online Relocation Guides and Personal Services to help make your transition go more smoothly.